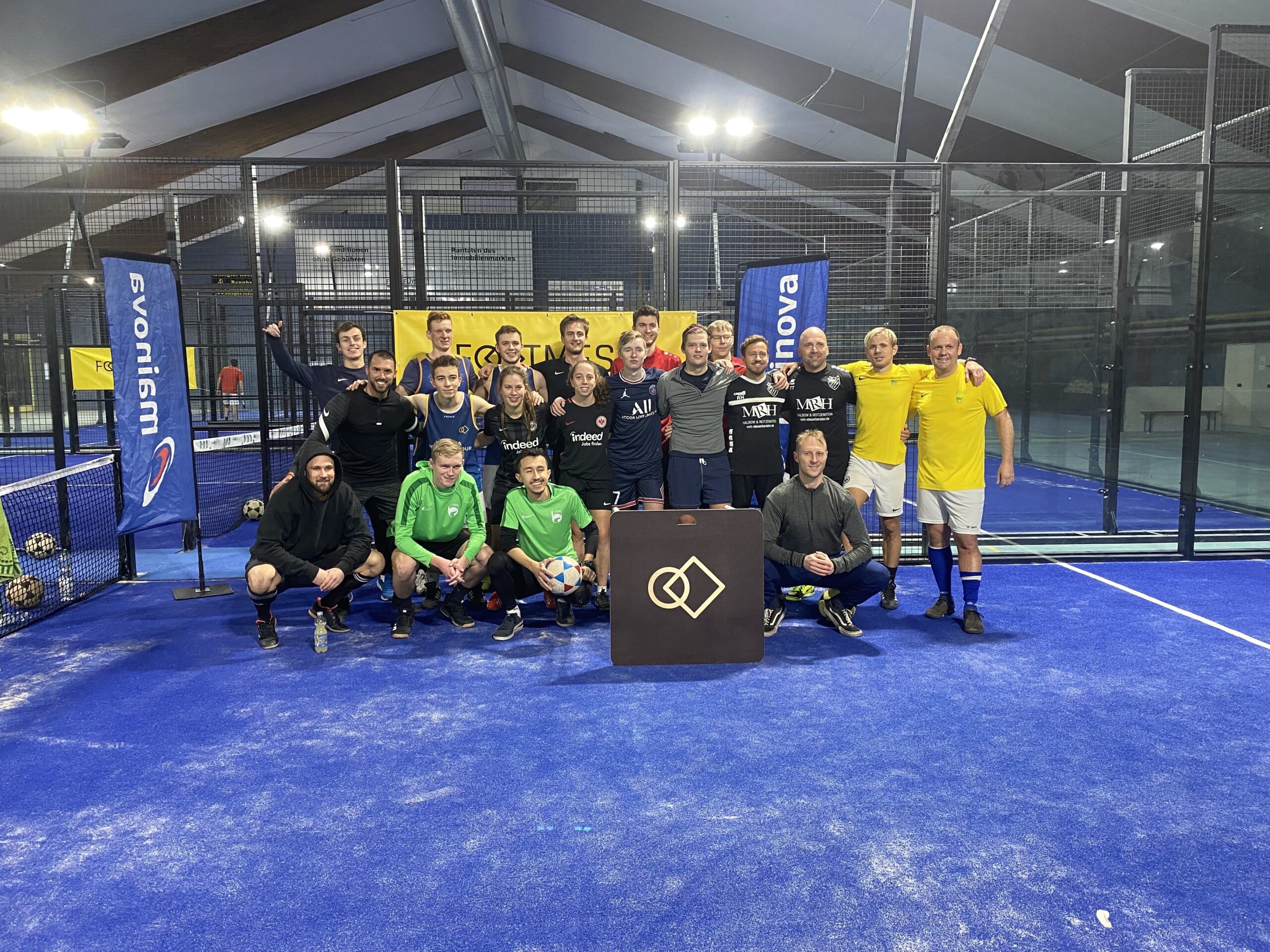 On December 18th we could successfully conclude the Mainova Footmesa Tour 2021 with the seventh stop.
In the sports center "Wallau Multisports" we held our tournament on the courts of "Padel Rhein Main".Many thanks to these two partners for the good cooperation! In a Padel Court of the size 20m * 10 m two Footmesa Courts à 100 m² found place, which are separated by the central net. On each of the other three sides there are plexiglass panels or grids, which were used in our sport as a gang.
The initial 15 registrations shrank to eleven teams a few days before the tournament due to injury and illness. Strongly represented were, as always, FC Germania Enkheim and the 1st FCA Darmstadt, fortunately also some newcomers from the university sports groups Darmstadt and Frankfurt came to their first tournament. The clubs TSV Wiesbaden, FC 1931 Eddersheim and TSG Hechtsheim from Main
and TSG Hechtsheim from Mainz. The only women's team of the day was made up of footballers from FC Dortelweil and Offenbacher Kickers.

The first group phase started with five and six teams dueling each other.
As expected, the favored teams P. Halbow/Peter, Börner/Schad and R.Halbow/Tomic won their groups. A small surprise was achieved by newcomer Gerstberger from Eddersheim, who in his first tournament appearance together with partner Lang Talavera achieved a 2nd place in the first group phase.

The two group winners and runners-up formed a new group A, in which the top teams of the day fought for the first places. The third and fourth-placed teams in Group B battled it out for fifth to eighth place.
eighth, while in Group C the ninth to eleventh places were played out.

In group C, the ladies Mundt/Träger of Unisport Frankfurt were able to assert themselves and reached with the group victory the overall 9th place ahead of their teammates Brossollet/Duhm on rank 10.
Brossollet/Duhm in turn beat their competitors Nguyen/Wiewesiek of the Unisport group from Darmstadt, who however managed to win one set in the first group phase. With Schmidt/Bauss there was another team from Unisport Darmstadt, who showed good approaches, but this time were still inferior to the more experienced players from group B: overall 8th place!
In the remaining matches, there were closely contested games with equally strong teams at eye level. Each of the three teams could record one victory and one defeat. Basler/Otsuka (Mainz & Frankenthal) finished fifth due to the better set ratio, while Cozaro/Stäter (Darmstadt) and Ferreira/Rothenbächer (Wiesbaden) finished sixth and seventh.

In Group A with the four strongest teams, Lang Talavera/Gerstberger showed a high level of performance,
However, they were not able to win a set against the three well-rehearsed teams in the same group: overall, a great fourth place, which meant the best tournament result of 2021 for Lang Talavera!
Börner/Schad won one more set and thus secured a place on the podium. They won the first set in a thrilling match against the Enkheim favorites P.Halbow/Peter
who, however, won the third set 15:11 to enter the final. There, R.Halbow/Tomic were already waiting for their training colleagues from the squad of FC Germania
Enkheim. Both teams already met in the first group phase, in which P.Halbow/Peter clearly kept the upper hand. Will R.Halbow/Tomic now succeed in taking revenge in the final?
In a match at the highest level, the favorites won the first set again. R.Halbow/Tomic, however, started furiously into the second set and were able to keep a lead over the entire course of the set and save it for the finish: 18:16!
the finish: 18:16! A dream for the spectators: the third decisive set had to be won! Tomic's feared foot attacks did not lead to success as often as before in the end, also due to Peter's strong defense. With 15:11 P.Halbow/Peter won their second title of the season.
Congratulations to Enkheim for the great performance!
The best player of the whole tournament series, Michael Peter, unfortunately could not be present, but the best U21 player of the year: Paul Lang Talavera. Congratulations to both of you for your consistently good results at the Mainova Footmesa Tour 2021!
With the end of the season, the top eight players who will make up the Footmesa National Team in
2022:
- Michael Peter (rank 1, 197 points)
- Philipp Halbow (rank 2, 189 points)
- Severin Schad (rank 3, 169 points)
- Robin Halbow (rank 4, 148 points)
- Felix Lange (rank 5, 134 points)
- Rico Börner (rank 6, 129 points)
- Helder Miguel Ferreira de Freitas (rank 7, 122 points)
- Andreas Peter (rank 8, 112 points)

They are to compete for Germany next year in international